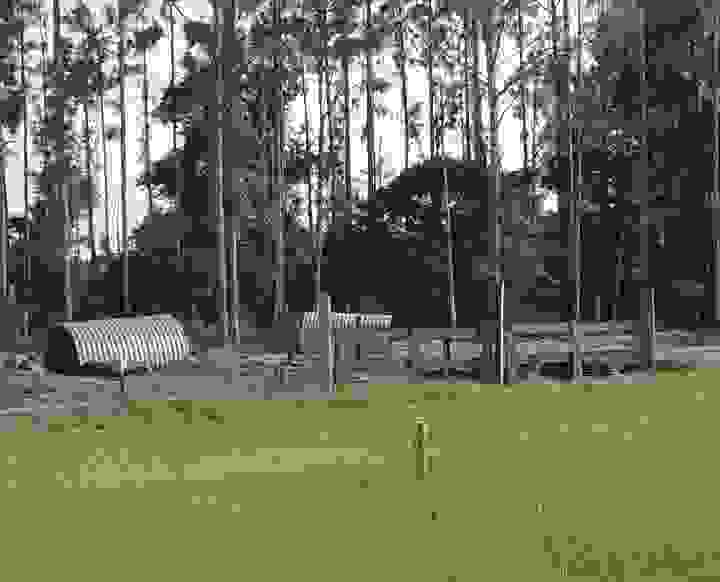 There are many factors that contribute to meat quality:  Diet, breeding or genetics, and the environment the animal is maintained.
First lets talk about diet.  We will compare the two extremes of Show pigs and meat quality hogs.  Show pigs would normally be fed a diet of around 22 to 24 percent protein feed.  The reason for this is if you feed high protein feed the hog puts on more muscle and less fat ( both intramuscular and back fat).  If you feed a lower protein diet of 10 or 12 percent protein the hog will put on less muscle and more fat.
What is preferred is a balance between the high fat and low fat hog. We feed a 16 percent protein which works well with our breed of hog.  This gives us just about the right amount of fat both in the muscle and on the back.  Commodity hogs run between 1/2 inch and 1/4 inch of back fat.  Our hogs run between 1 inch and 11/4 inch of back fat.      Also you need a good amount of intramuscular fat.  This gives you your flavor and tenderness like in a good steak.
Secondly you need good genetics for meat quality. As most of you know the Berkshire is known for meat quality.  This is because the fat has not been bred out of this breed as bad as most other breeds.  The same is true of the Hereford. Another genetic trait that both breeds share is the meat is at a near neutral Ph.  This trait effects the meats ability to retain water in the muscle better than supermarket pork.
Third the environment in which the animal is raised determines how much exercise and stress the animal is exposed to.  Just like with people to little exercise or to much stress can effect the muscles of the animal and also the meat quality.  It is our belief that exercise allows more oxygen in the blood to travel throughout the meat of the hog which provides meat with more redness in color.  We studied 10 breeds on our farm before we settled in on Herefords.
We had Berkshires, Tamworths, Poland China, Spots, Durocs, Yorkshires, Hampshires, Herefords, Landrace and Chester Whites.  We also had many cross bred hogs such as Farmers Hybrid, Blue Butts (hampXyork)  DurocXYork and other combinations.
We were introduced to Meat Quality Pork Production with the help of the University of Florida.
After sampling 10 breeds of pork we reduced our herd down to Berkshires, Durocs, Tamworths and Herefords. We continued to study these breeds before we settled in on Hereford Hogs.
The Hereford hogs offered excellent intramuscular fat and a neutral Ph of the meat with a red meat color similar to beef.
When we did meat test we found the meat to be both tender and juicy.
The disadvantages we found with the Herefords are they don't produce as many pigs per litter as many of the other breeds and they don't grow as fast as others.
After eating the Hereford pork we decided the meat quality was worth the trade off.

Free Range Natural Pork is a style of farming that goes back many centuries.  The earliest of man domesticated swine.
This type of farming has a lot to offer both man and beast.  The farmer gets a lot of enjoyment by seeing the hog in its natural environment.
The hog gets the assistance of the farmer to improve its quality of life by fulfilling its every need.
Our hogs enjoy their entire life outdoors with plenty of food, water and shelter.  The hogs determine when they lay in the water and mud to cool not the farmer.
The hog also decides when it wants to browse, sun or lay in the shade.
On commodity farms the pigs are normally weaned at 18 to 21 days after birth.  Our pigs normally stay with their mothers 6 to 8 weeks.
To replace the need for mothers milk the commodity pigs are fed a diet of around 24% protein.  This diet also helps build large lean muscles which tend to be a little less enjoyable to eat.
During their time with mother our pigs naturally make the transition from mothers milk to mothers feed ration of 16% and what ever they may choose to browse on.  After the pigs are established on the new diet they are removed from mother and continue on this diet until they are used for breeders or market hogs similar to in nature.
Being raised on this lower protein level of feed allows the natural meat quality of the hog to blossom while still meeting the animals needs for nutrition.
Our feed consist of a blend of midwest corn,wheat mids, soybean meal and added vitamins and minerals.
This formula was certified all natural by an outside 3rd party.